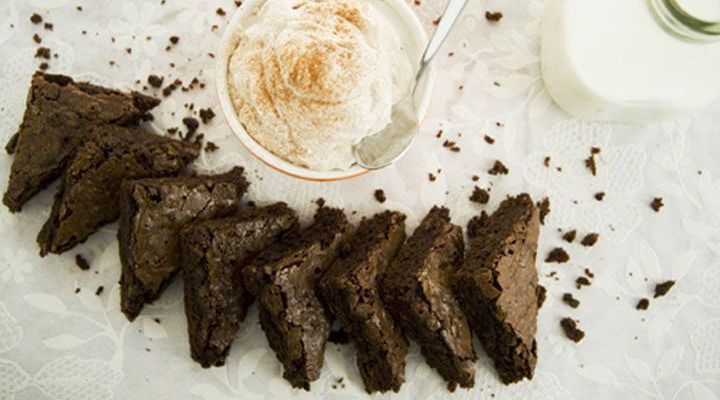 Prepare Pans: Cut out a parchment square to exactly fit the bottom of the pan. Using a pastry brush, butter the 12x17 sheet pan. Place in the parchment and butter it as well.

Melt Chocolates: In a bowl over a double boiler, melt the chocolates with the sugars and butter. Remove from heat and let cool slightly.

Make Brownies: In a small bowl, combine the eggs with the vanilla, salt and cinnamon. Whisk the egg mixture into the slightly cooled chocolate. Then fold in the flour until just combined (do not overmix or the brownies will get tough). Pour into the prepared pan and bake for 15-20 minutes, or until a skewer comes out clean. Let cool for about 10 minutes, then remove from pan and cut into 40 one-inch squares.

Prepare Cinnamon Whipped Cream: Pour the cream, sugar, vanilla and cinnamon into a bowl. Beat cream until soft peaks form. (Do not overmix or it will form butter!)

Serve: Serve brownies on a platter with the whipped cream in a bowl served on the side.