Welcome to "Reach for the Summit," a computer simulation that utilizes software to teach strategic lessons not easily learned in the corporate workplace. Synergy Learning Systems, a Santa Cruz, California-based company, administers the software to organizations in the U.S. and worldwide. Call it team building—and it's come a long way. 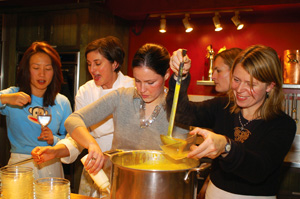 At its simplest, team building is a collective activity that helps members of an organization to bond. The objective can be as basic as ice-breaking, as when new employees get to know existing ones, or existing employees—particularly ones whose work or position may keep them isolated—get better acquainted.

Organizations have sent their workers to dude ranches, rounded them up for scavenger hunts, cast them in murder mysteries, tasked them to build boats, and herded them into kitchens for a vast array of other, below-the-surface reasons: to raise morale, get creative juices flowing, increase synergy, smooth over intra-corporate relations, reward high-performing employees, and simply lighten them up.

"You have a common goal, you weave in everyday work challenges, and you create a lot of energy in the process. There's always a sense of accomplishment, and that is empowering. At the end of the day, everybody feels good," says John McAulifse. A corporate trainer at Athena Diagnostics, a pharmaceutical sales company in Massachusetts, McAulifse organizes the annual sales meeting, for which he relies heavily on team building. He's just completed a "blockbuster year," which incorporated a program called FilmFest and turned his sales force into moviemakers in the process.

In its infancy, the team-building industry was synonymous with ropes courses, challenging obstacle trails in which one had to rely on one's partner(s) to make it safely through. A smattering of enterprising outfitters spearheaded the business model, seeing gold in a recreational sport that taught people a basic lesson. "Back then," says Mark Loren, co-founder of Synergy Learning Systems, which works frequently with Google, eBay, Genentech, and other high-tech corporations, "anyone who had outdoors experience could hang up a shingle and show clients a good time." The events were fun, democratic, and educational. The team building concept was born.
Today, the industry thrives. Companies that survived the post-2001 bubble burst have seen business skyrocket. Demand is so great that team building facilitators have often wound up in the business unintentionally. The owners of ComedySportz, a 22-year-old facilitator with 22 locations nationwide, were approached by a group of Apple engineers who wanted to know if the improvisational performance company could teach them how to interact as seamlessly as the performers did on stage. They did, and now, half of ComedySportz' business has gone corporate.